Producer/presenter Greg Grainger has driven around the entire state to film a series of stories, from America’s loneliest highway, the steam train out of Ely and the Indian dancers of Lake Tahoe to the gun-toting Beattie cowboys and car forest of Goldfield.

One day Greg is throwing snowballs near a glacier in the Great Basin National Park, the next he’s driving dune buggies in the Valley of Fire State Park where temperatures are hitting 115-degrees Fahrenheit.

There’s a flight from Nevada over the Grand Canyon in a helicopter with no doors, to an encounter with a ghost in the Mizpah Hotel in Tonopah.

The Nevada special climaxes in Las Vegas, as a singing gondolier takes Greg through the Italian-themed grand canals of the Venetian Hotel, and the all-Aussie boy band Human Nature performs its new stage show. 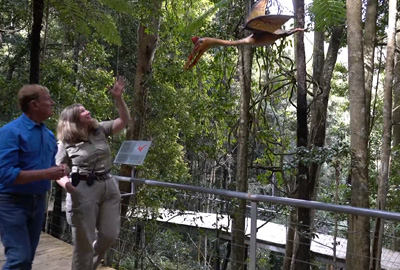